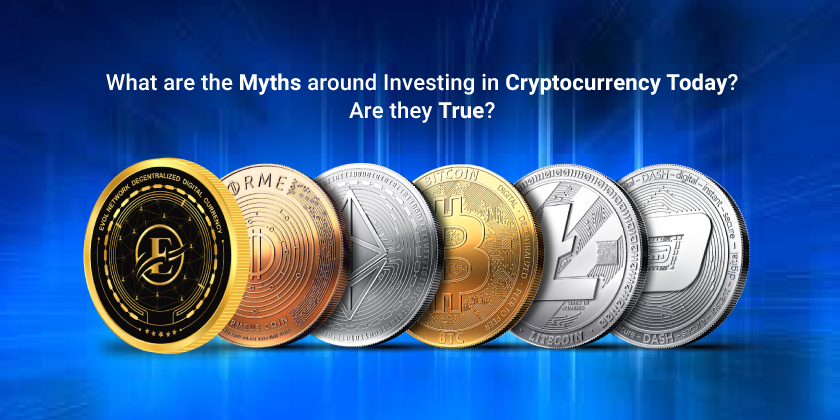 What are the myths around investing in cryptocurrency today? Are they true?

Cryptocurrency is not today’s news. It has been around since 2013 when bitcoin, the first cryptocurrency, made its mark on the world.

The idea of a virtual currency sounds promising, but today, it is great to see that cryptocurrency has gained official status in some countries.

Many things are going on in the crypto-sphere, and not all of them are true.

If you open social media platforms and search for the talks related to bitcoins, you will find that people give their suggestions to the questions asked by the people. Neither of them has a clue most of the time.

There are some of the common questions and myths found on social media and community platforms.

This myth is true to some extent. Centralized platforms use a centralized server, which means all the information has to pass from there, and if that system fails, the entire platform does not work. Also, the central server is prone to more attacks by hackers because all the data can be leaked from a single source. It also has a third party as an intermediary.

The security comes in the form of anonymity offered by a decentralized system.

Let us take the example of EVOL cryptocurrency. It is a virtual decentralized cryptocurrency that offers the same benefits to investors, and the exciting thing is, you can make a transaction using off-chain technology.

The world has seen rapid growth in the public's interest in bitcoin, so the banks cannot just let the chance go away.

Banks would benefit from the cryptocurrency as it would make all the unnecessary losses redundant.

This one is not that true. The gold standard was an early attempt to create a monetary system that helped the currency convert into gold. The amount of gold was fixed based on the reserve. If the gold miners found more gold deposits, then it will lead to price change. The US government wanted to stabilize the price of gold, but the entire gold standard was faulty.

The price instability followed and changed the economies.

People have said that the bubble of cryptocurrency will burst, and some say it has already burst. Well, so far, no wrong predictions have proven true. So, it is just a matter of change of time.

The first investors in cryptocurrencies will get more benefits. EVOL is a cryptocurrency that offers coins by letting you win as many coins as possible through its Bounty program, Giveaway Contests, and social media connections.

Well, this myth can be true. Gold prices are not stable, and cryptocurrency is easily transferable. Some countries like Turkey have decided to ban the bitcoin currency because Turkey has had a history with inflation and prefers to invest in stable assets. So the price fluctuations are posing a threat to their gold investment practice.

Experts have said that the cryptocurrency will likely put the fiat currency out of business in the next 3 to 4 decades.

Some of the countries want bankless transactions to run their economies smoothly. El Salvador has accepted payments in Bitcoins officially. So it is all about the time.

This myth that bitcoin will take over the financial world is in itself speculation. But soon, the world will be caught in the race.

The world needs an acceptable currency that can be trusted and that pays for all the daily transactions. And besides, the government needs the money to back up the operations nationwide. Nothing can shut down immediately because the gold, which has had a controversial history, has not been replaced permanently.

Like all the great things, this will also take time.

Well, all of the above points are worth considering for a debate, but if you are planning to invest in a cryptocurrency and become lucky among the lucky investors, you can go through a great place called EVOL Network. You can win EVOL Coins easily by following simple steps and transacting EVOL coins in other cryptocurrencies like Ethereum.

Visit us at www.evolnetwork.com to take your business to the next level.